THE ARREST OF THE SUPERYACHT EQUANIMITY

~ Proceeds of sale are to charity ~

“USD1.590 billion of the bonds proceeds, amounting to 58.4% of the monies received by 1MDB Global were diverted, in breach of trust by those in control of 1MDB Global, into bank accounts managed by Jho Low and his nominees. Meaningless in-flow and out-flow of funds, over layers of accounts across numerous jurisdictions, were effected in an attempt to conceal their origin and ownership. Finally, these monies were paid in three tranches to Oceanco for the purchase of the Equanimity…

We amalgamated the tools of tracing and following, afforded under constructive trust principles of equity and common law, with the rights in rem offered by admiralty law. An ownership claim in rem was thereby cast. It overcame hurdles otherwise posed by national boundaries in respect of any in personam action directly against either Jho Low or his companies. The net then drew tightly over the Equanimity as she entered Malaysian waters…

The arrest was quite a magnificent sight, and a patriotic event. Our pride on behalf of the nation, in peacefully taking back the people’s property, cannot fully be articulated.

That moment, witnessed by all of us present at the Boustead Cruise Centre, with extensive local and international media coverage, and the days to come, accentuated by the rallying of the people of Malaysia around the efforts to set our country back on track to financial recovery, were soul-stirring.

Little girls, who watched the event on the television, I was told by their mothers, were in awe that a woman could lead a team to do ‘Big Work’. All this, in addition to my personal sense of fulfilment in doing ‘my bit’ for my country. Sheer, indescribable joy. 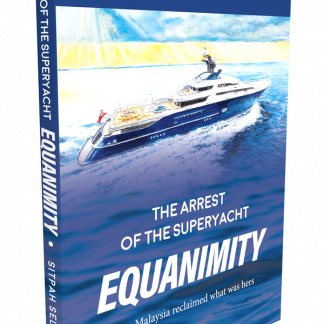 You're viewing: THE ARREST OF THE SUPERYACHT EQUANIMITY RM 108
Add to cart